Do you have a case ?

Since 1980 Michael K. Eidman has been deriving immense satisfaction from working intimately with his clients, developing cases from the investigatory stages all the way to their conclusion. Many firms send investigators to “sign up” clients, but Mr. Eidman personally meets every potential new client. He takes the time to explain the legal process in detail; visits the site of the occurrence; takes photographs; prepares and reviews all documents; goes to court; and handles all communication with the adversary. Mr. Eidman personally returns all phone calls (usually the same day!). 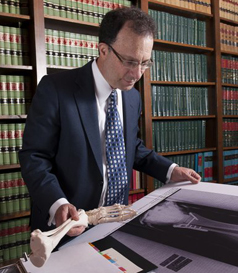 In order give his clients this degree of individualized attention, Mr. Eidman has chosen to limit his practice to a few select cases. If he accepts your case, you will have his full and undivided attention.

Michael K. Eidman was raised in the Washington Heights section of Manhattan, graduated magna cum laude and with honors in Political Science, from CUNY Queens College. He received his law degree from Boston University School of Law in 1979. He is a member of the bar of the States of New York and New Jersey and maintains offices in both jurisdictions. Mr. Eidman is also admitted to practice before the various local federal courts and has been a member of the New York State Trial Lawyers Association for nearly 40 years. In 2016, he was honored to be sworn into practice before the U.S. Supreme Court by Chief Justice John Roberts.

In private practice since 1980, Mr. Eidman concentrates in the areas of personal injury and medical malpractice litigation, on behalf of seriously injured people. He does not represent insurance companies, hospitals or corporate conglomerates. Mr. Eidman established and managed the personal injury departments of several firms in which he was a partner until 1998, then he opened his own solo-practice, devoted exclusively to the representation of victims of personal injury and medical malpractice.   Mr. Eidman has tried cases in all of the local courts and serves on an “of counsel” basis to many firms and attorneys in New York and New Jersey who do not possess expertise in the field of personal injury. The vast majority of his cases are referred to him by other attorneys or by former clients. His cases have been covered in the New York Times and other local papers and he has appeared on various local television news broadcasts.

Mr. Eidman served 3 terms as an elected member of the Democratic Municipal Committee of his home town and is an active participant in community affairs.

Mr. Eidman has been named to Super Lawyers commencing 2012 through 2020, for the New York Metro region. He is also a life member of the Million Dollar Advocates Forum®, The Top Trial Lawyers in America® and has an AVVO rating of 10.0.